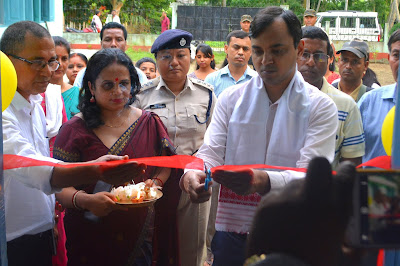 Kasturi Sishu Griha,Mangaldai,June 18: Established on December 25 in 2014,Kasturi Sishu Griha,Darrang has been the home for so many boys and t girls of Darrang and Udalguri districts.who had been abandoned by their relatives or lost contacts with near and dear ones.Orphan homeless children,POCSO victims,child marriage victims have been given warmth of family affection in this child care home since last five years.On the occasion of receiving first installment of a financial grant of Rs.3.30 lakhs from Numaligarh Refinery Ltd,a ceremony was held at the Sishu Griha premises on June 17.Ghansyam Das,IAS,Deputy Commissioner,Darrang attended as the chief guest.He spent nearly an hour with the inmates,guides and teachers. On the occasion DC Das discussed problems and prospects of inmates of Kasturi Sishu Griha.He also directed government officials present for development and expansion of the centre.Deputy Commissioner Das also inaugurated a new residential house for destitute children and woman.Speaking on the occasion He thanked organizers and well wishers of the child care home for giving new lease of life to the homeless boys and girls.He requested children and teachers to concentrate more on study and development of own skills.DC also inspected various items donated by NRL for the use of the inmates. Items of sports goods,furniture,utensil,bicycles etc were purchased from NRL donated amounts.Mamoni Hazarika, DSP,(HQ),Darrang;Rajen Chandra Das,chairperson, District Child Welfare Committee;Kobendra Warisa,District Child Protection Officer;Social worker Dulal Deka,senior journalists Jayanta Kumar Das,Abdul Khalek,Maksed Ali were also present at the ceremony while Rashmi Rekha Sarma,Superintendent (CCI) anchored the proceeding of the ceremony.The Kasturi Sishu Griha was found on December 25 in the year 2014 by Mahila Kalyan Samaj, an NGO,which received recognition from Niti Ayaog in 2018 (AS/2018/0195774).Presently there are six numbers of child marriage victims and one sexually exploited twelve years old pregnant girl among others taking shelter in the Sishu Griha.The shelter home has been rendering its best service to society through its child care activities with limited resources and support from a few noble persons of the state.The Sishu Griha has been taken good care by its founder Rashmi Rekha Sarma and local social workers namely-Manoranjan Sarma and Abhijit Deka,who have been working relentlessly for the safety and security of the helpless children.

Army to support mitigation of HEC in Udalguri 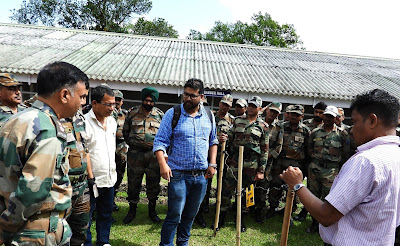 Hatigarh,June 4:Army personnel stationed in Udalguri district under the command of Red Horns Artillery Brigade,Hatigarh will offer their voluntary support for creation of awareness among people of the locality and also among army personnel for mitigation of Human-Elephant Conflict in the district which has so far taken lives of 116 people and 51 wild elephants during last six years.Udalguri district has now been known as the hot spot zone of the conflict.An interactive technical session was held at Babber Hall in Hatigarh Army Brigade HQ on June 4 recently for army officers and jawans. The awareness programme was organized by Red Horns Artillery Brigade and conducted by WWF,India North Bank Landscape Programme,Tezpur. Army officials from Hatigarh Field Hospital,also participated in the session.Lt.Col Rohit Sarma inaugurated the technical session at 10.30 am.He spoke on some causes of the conflict in the district with special reference to HEC affecting the normal activities and movement of army personnel in the northern parts of Udalguri district.Lt. Col Sarma requested Army personnel to understand the psychology and behavior of wild elephants so as to protect themselves and common people in any situation.He put emphasis on the creation of awareness among people to avoid conflict with wild elephants for peaceful co existence. Hiten Baishya and David Smith of WWF,Tezpur conducted the multimedia demonstration session human-elephant conflict its causes and solutions with special reference to psychology and and behavior of wild elephants. Dr. Anupam Sarma,Coordinator of WWF NBL Programme spoke on the necessity of using 12 volts solar or battery energizers to keep away wild elephants from houses and crops.According to him the low cost and low power 'Fence System' is a security technology with high voltage pulses being delivered down the wire that is not life threatening or lethal.Other systems like inverters or AC lines are always fatal which had killed several man and wild elephants in the state. Jayanta Kumar Das,Wildlife activist and Hony.Wildlife Warden also spoke on the occasion with special reference to human-elephant conflict in Udalguri district since 2007.A live demonstration of low power fence system was also conducted at the end of the session by WWF team."It was a great learning experience for both the sides and will help in long way to mitigate 'Human-Elephant Conflict' in Assam",so said a army jawan attending the technical session at the end. 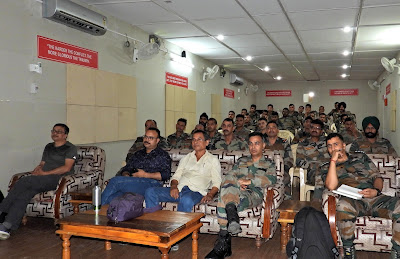 "Know our Original Home and lets learn how to protect it",ABSU 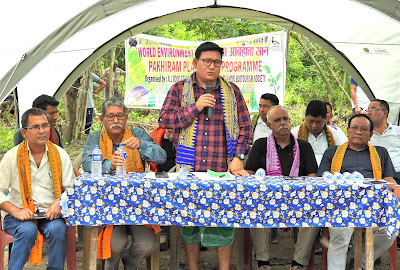 Chepna,Manas NP.June 5: All Bodo Students Union (ABSU) organized World Environment Day inside Manas Tiger Reserve near Chepna NC in Baksa district on June 5 with a daylong programme.The programme was organized centrally by ABSU in association with Manas Maozigendri Eco-Tourism Society (MMETC) and forest department.A massive plantation programme of planting more than ten thousand fruit tree saplings were also done on the day in presence of several distinguished wildlife activists, government officials,woman,students and villagers.The event titled as "Pakhiram Plantation Programme"was organized to senstise people ofn healthy environment and to promote tree plantation.More than a thousand villagers participated in the plantation programme near India-Bhutan international border.Lawrence Islary,general secretary,ABSU welcome all the distinguished guests and participants in his welcome speech at 9 am followed by the morning prayer at 9.30 am lead by Maneswar Daimari, Advisor, ABSU. Keynote speech was delivered by Pramod Boro,president,ABSU at 9.30 am who also presided over the ceremony.Speaking on the occasion Boro said,"Our nature was so neat and clean before the new civilization started.We have destroyed so many things to build something for our pleasant living and so called modern civilization by putting our Mother Earth and nature in a threat.It is most important to preserve our environment in a healthy condition and work hard to return its original disposition. We talk of our various rights everyday,but never talk about the rights of nature and environment".He further said that human beings had been the most selfish among all the creatures.He expressed his displeasure saying that the beautiful landscape and pleasant atmosphere would disappear soon if people failed to take care of Mother Nature.The plantation ceremony was also addressed by Bikash Brahma,IFS, Rtd,PCCF, Assam;Citta Ranjan Bhobora,IFS,Rtd Conservator of Forest,Assam and presently working with WWT; Ritesh Bhattacharya, IFS,Rtd,Conservators of Forest,Assam; Dharanidhar Boro,OSD,Manas National Park and Jayanta Kumar Das,Hony.Wildlife Warden, Assam. Anip Basumatari,MCLA,BTC,Chapajuri inaugurated the tree plantation drive while Raghunath Boro,Deputy Field Director, Manas National Park;Dipen Boro,vice president,ABSU and career counsel,Ranjan Barua attended as the distinguished guests. 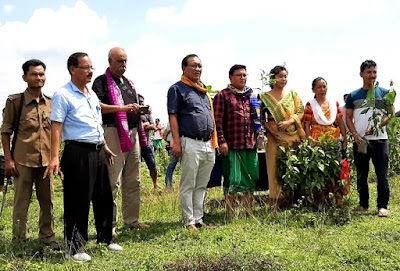